How Batteries Will Power a More Stable Power Grid Pt 1

Renewable energy is a key to developing more resilient and stable power grids. Energy crises are becoming more prevalent as extreme weather and increasing energy demands place more stress on power grids. These outages have led the U.S. economy to lose over $150 billion annually according to a Department of Energy study.

In 2021, the Texas power outage left over 4.5 million homes and businesses without power for several days. The grid failure was due to unpreparedness and a series of severe storms. Not only did it leave millions without power, but wholesale energy prices also skyrocketed up to $9,000/MWh (typically $50/MWh).

These types of outages are one of the main reasons the Infrastructure Bill allocated over $70 billion of investment into power infrastructure, specifically clean energy transmission. Batteries, especially battery energy storage systems (BESS), will lead this revolution to more stable power grids through renewable energy sources.

Extreme weather events and increasing power demands highlight the importance of developing stable and reliable power grids. In 2020, utility customers in the United States experienced an increase in total annual power interruptions. According to PowerOutage.US, utility customers saw a 73% increase in outage hours from 2019, totaling over 1.33 billion hours.

While interruptions without major events hold relatively steady year over year, the reality is major events are becoming more frequent. Since 1980, billion-dollar climate and weather disasters have steadily increased. 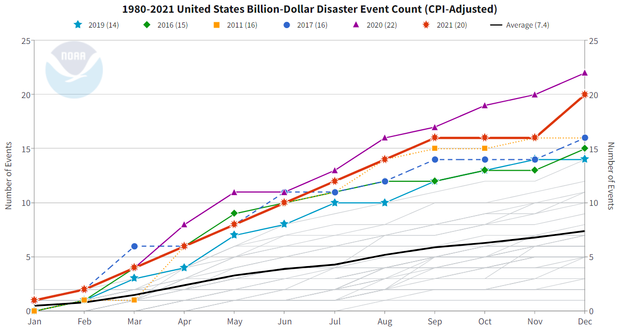 In many cases, power outages due to extreme weather events disrupt vital services that people rely on. From extreme heat to frigid temperatures to at-home medical devices, many consumers and businesses need a stable power grid to survive.

Since 2011, battery storage capacity grew 18 fold and utility-scale battery capacity is expected to grow by 84% this year alone. In addition to storage improvements, the cost of BESS continues to improve to the point where utility-scale batteries are economically viable for utilities and companies to transition from peaker plants and diesel and gas-powered generators.

In 2018, McKinsey modeled two scenarios for the cost improvements in BESS. In the best-in-class scenario, McKinsey predicted that battery packs could break through the $100 per kWh mark in 2020. BloombergNEF reported that this was indeed the case as battery packs in China broke below the $100 per kWh mark. This likely signals the BESS industry is following the best-in-class scenario significantly increasing the economic case for utilities, companies and consumers to switch to renewable energy sources.

Renewable energy sources and BESS address these issues by enabling energy storage and the decentralization of power grids to reduce the overall stress placed on the system during extreme weather events and during peak demand hours. They are also becoming more economically viable for all stakeholders leading to increased adoption.