The European Union is in the midst of an unprecedented energy crisis. It has led to a massive spike in natural-gas futures price and the effects are rippling across global markets as policymakers scramble to find potential solutions.

While this is a lucrative market for U.S. natural gas suppliers, it may place additional strain on the power grid depending on the duration of the energy crisis. As companies begin to export more natural gas, it leaves the U.S. more susceptible to an energy crisis during extreme weather events during the summer or winter months. This new dynamic emphasizes the importance of transitioning to renewable energy globally to mitigate energy shortages, especially in the EU.

Before the crisis, the majority of European countries exceeded their renewable energy goals. This necessary transition will reduce the risk of potential energy crises and drive more resilient power grids in the future.

The current energy crisis, however, raises potential questions about the short-term viability of renewable energy solutions in their current state. Despite concerns, this crisis is likely to act as a catalyst for renewable adoption as these solutions enable more energy self-sustainability while reducing costs in the long run.

How the Energy Crisis Occurred

The European energy crisis occurred due to numerous internal decisions and global events that caused natural gas prices to spike. Some of the important factors include extreme weather due to climate change, phasing out of fossil fuels, reliance on Russian oil and gas and the reopening of economies.

Across Europe, countries experienced extreme temperatures resulting in both record highs and lows. In order to cope with these temperature fluctuations, people relied more on heating and air conditioning systems. This drove an increase in energy demand and usage forcing utilities to use their natural gas reserves to keep pace.

Extreme weather wasn’t limited to Europe. In the United States, Texas grappled with a series of severe storms that left millions without power for days and others grappled with heat waves that resulted in rolling blackouts. This led the U.S. to reduce natural gas exports to improve its reserves for future extreme weather events.

Natural gas storage in the European Union (EU) reached historical lows due to many factors including the bouts of extreme weather across the world. With people using heating and cooling systems more to escape frigid and hot temperatures, natural gas reserves were depleted.

In 2019, the Netherlands announced that it would begin to phase out Groningen’s natural gas production. Groningen is the largest natural gas field in Europe and this decision required many countries to rely more heavily on importing liquid natural gas (LNG) to maintain storage levels.

With more emphasis on importing LNG, Russia grew into Europe’s largest supplier. Currently, Russia exports over 40% of LNG to the EU. Despite the EU requiring more LNG to maintain healthy storage levels, Russia only exported the amount required in its long-term contractual obligations.

Russia’s recent actions in Ukraine created even more uncertainty around the supply levels of natural gas for Europe. While Russia continues to fulfill its obligations, European countries must decide how to navigate the ongoing energy crisis and reliance on Russian LNG.

During the start of the pandemic, many countries experienced a reduction in electricity demand. Overall, electricity demand was down significantly as people spent more time at home and businesses reduced hours, shuddered and transitioned to work-from-home. 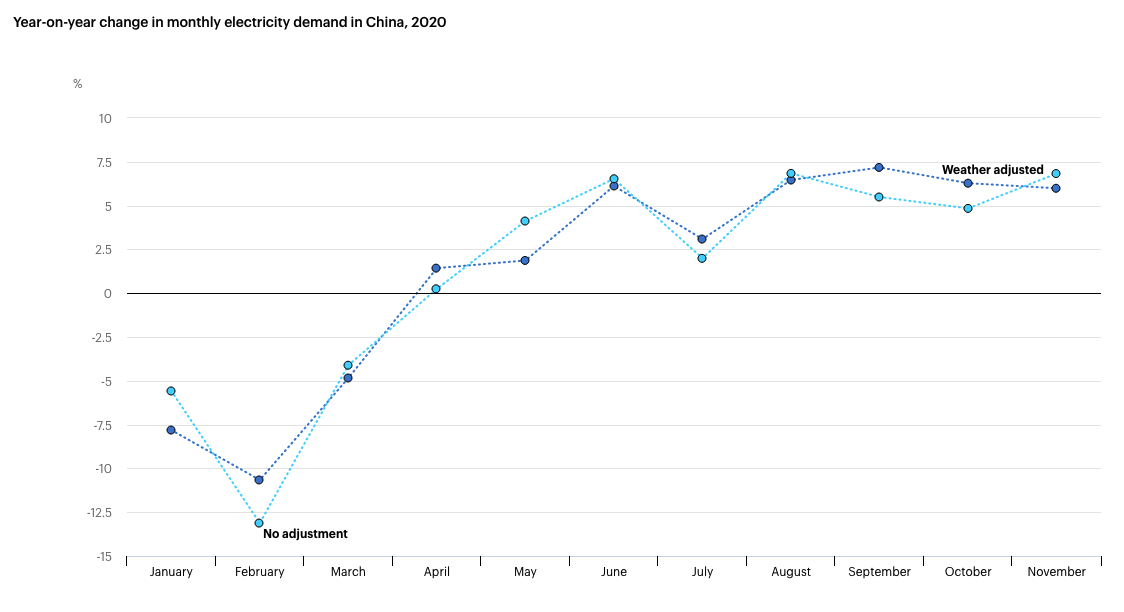 With more emphasis placed on importing natural gas, the EU is competing with Asian countries for LNG from suppliers in the United States and the Middle East. In combination with the historically low natural gas storage levels, the phasing out of Groningen and the goal to reduce reliance on Russian oil and gas, the EU is experiencing a massive energy crisis.

The energy crisis highlights some short-term gaps as the EU phases out fossil fuels and transitions to renewable energy. The variability of renewables and lack of sufficient storage are two of the factors that contributed to the current energy crisis. Current innovations address these issues and drive down costs enough to make them economically viable for most stakeholders.

One of the factors that contributed to the ongoing energy crisis is renewable energy generation variability. Renewable energy is dependent on the weather and the ability to effectively store the energy that is produced. Even if renewable energy production is optimal, countries must be able to capture and store it.

This emphasizes the importance of innovation in battery energy storage systems (BESS) to effectively store excess power generated throughout the day during low-demand times. The stored power can then be discharged during peak demand times to reduce the strain on the overall grid.

With many European countries successfully meeting and exceeding renewable energy goals, the deployment of BESS is the next step that will help mitigate future energy crises. BESS enables communities to reduce reliance on central power girds and contribute stored power to improve resilience.

Since 2011, battery storage capacity grew over 18 fold and utility-scale battery capacity is expected to grow 84% this year alone. As capacity continues to increase from strong investment in battery research and development, countries will be able to reduce the variability of renewable energy and solve the pressing storage issue.

In the United Kingdom, the Clay-Tile site in Essex is leveraging 198 MWh of Tesla Megapack lithium-ion battery storage system technology to construct the largest storage project in the U.K. As battery storage continues to rapidly improve, renewable energy will be readily available and reduce the reliance on fossil fuels and importing natural gas.

The energy crisis will act as a catalyst for more countries to adopt large-scale BESS to improve the reliability of renewable energy sources. By reducing variability with energy storage, the EU will be able to prevent future energy shortages and reduce reliance on gas imports.

Energy bills increased 54% from 2020 in Europe according to Bank of America. The average eurozone household is expected to spend 1850 euros on electricity and gas this year, up from 1200 euros in 2020. Some residents are experiencing energy bills as high as three to four times their normal rate.

Now renewable energy is more cost-effective than oil and natural gas. In 2020 alone, the cost of renewable power energy declined by as much as 16% while natural gas and oil prices spiked. The realized cost savings from transitioning to renewable energy sources like solar are hard to ignore at current natural gas prices.

In addition to energy cost savings, the average cost of a solar panel dropped by 90% from 2010 to 2020 while becoming more efficient at generating renewable energy according to Bloomberg. This allows households to generate more energy, at a lower upfront cost and further reduce their reliance on power grids.

The improvements in renewable generation and costs still raise an important question about energy storage for consumers. While BESS capacity continues to grow, many households may be more concerned about affordability to store the renewable power generated.

In 2018, McKinsey modeled two scenarios for energy-storage system cost reduction. In 2020, China broke below the $100 per kWh mark signaling the industry is likely following the plausible best-in-class scenario. For consumers, this means that energy storage is a potentially affordable solution to storing any excess renewable energy generated during the day that can be discharged during peak hours to further reduce their energy bills.

Along with renewable power generation, households can further reduce their energy bill by switching to heat pumps. Over 90% of heaters sold in Nordic countries like Finland, Norway and Sweeden are heat pumps. These generate more energy in the form of heat than they consume electricity and may function as both a heating and cooling system.

The large improvements in renewable energy generation, energy storage and heat pumps effectively reduce the energy bill costs for European households. Not only can they reduce their energy consumption, but they can also reduce their reliance on the main power grid while improving its stability.