Renewable energy continues to display promising global growth and adoption as countries strive to reduce their carbon emissions. The world added a record 295 gigawatts of renewable power capacity (equivalent to 32 years worth of energy to power all of New York City) last year. In 2022, global renewable energy generation is on pace to grow more than 10%.

While the persisting European energy crisis pushes many countries to shift from natural gas to coal in the short term, long-term policies emphasize increasing renewable adoption. The surge in adoption is largely driven by countries combating inflation caused by fossil fuel volatility and prices. As fossil fuel prices have dramatically increased, renewable energy is rapidly decreasing to a point that is the cheapest energy source.

The war in Ukraine, supply chain disruptions, and energy prices paint a murkier picture for renewable energy leading into next year. High energy prices are increasing costs for key materials in renewables and forcing countries to prolong their reliance on coal. Despite uncertainty around the energy markets, renewables are poised to continue their rapid ascension as the dominant energy source.

The reopening of economies and the Russian invasion of Ukraine exacerbated underlying vulnerabilities in the energy supply chain that led to the global energy crisis. The tight oil and natural gas markets forced prices to historic highs that caused countries to extend the lifecycle of many coal-fired power plants. As 2023 approaches, the overall energy outlook indicates these problems will persist priming the market for more renewable energy adoption.

The fossil fuel supply chain is expected to remain tight through the next year due to new policies, Russia’s invasion of Ukraine, and continued pandemic disruptions. Russia remains the major catalyst as nations observe sanctions that force them to reduce reliance on Russian fossil fuels like natural gas. While countries actively transition by relying more on coal, the supply chain is unable to meet demand. 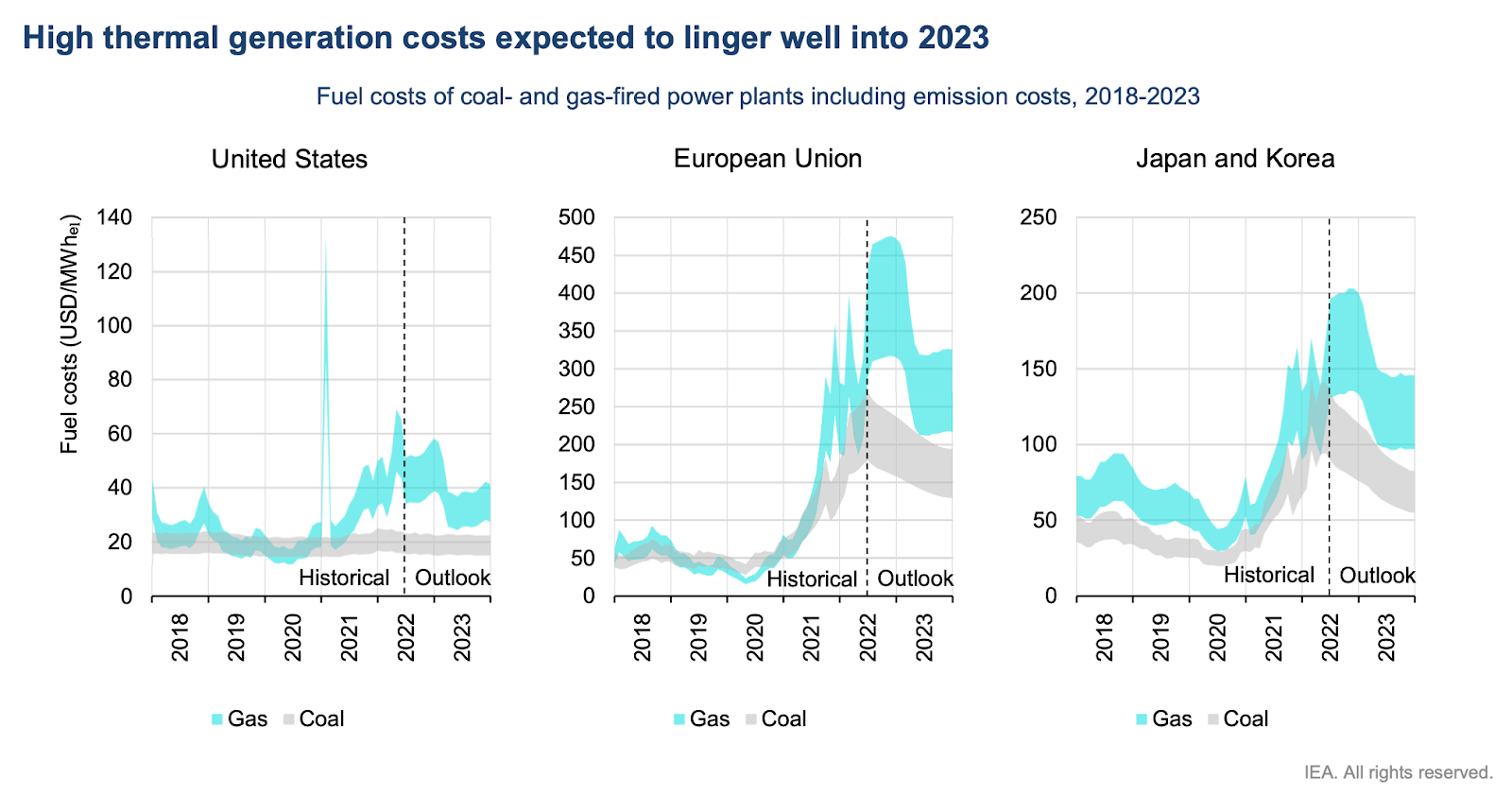 Sanctions on Russia removed one of the largest suppliers of crude oil and natural gas from the energy markets. This supply shock drove prices for gas, coal, and oil to historic highs leading to a global energy crisis. Despite the rises in demand, fossil fuel industries lack proper incentives to ramp up capital spending to increase supply.

During the pandemic, investors prioritized fiscal responsibility and capital expenditure management which led many oil and fossil fuel companies to reduce operations. As demand started to scale, policymakers began pressuring them to ramp up production while also discussing potential windfall profits tax. While these discussions emphasize net-zero emissions from these industries, they also disincentivize production increases leading to a continual tight supply market with high prices.

High and volatile fossil fuel prices are a leading factor driving a potential slowdown in global electricity demand. The reopening of the economy led to a surge in energy demand as people and businesses returned to their normal lives. This may be short-lived as energy prices remain high causing central banks are implementing fiscal policies to combat inflation that signal a potential economic slowdown.

One of the main geopolitical consequences of Russia invading Ukraine is the continued high energy prices which result in overall high commodity prices. This contributes to persistent inflation fears that are driving central bank policies globally. The interest rate hikes dampen economic activity as consumers and businesses reduce expenses and discretionary spending.

China accounts for more than 40% of final electricity demand with 20% consumed by commercial and services industries. As China continues to grapple with the pandemic, the resulting industrial production closures create an even tighter global supply chain. These major disruptions slow energy demand and may be felt far into next year.

While high energy prices and a global economic slowdown occupy headlines, renewables are poised for strong growth in the next year. Renewables are the cheapest source of power while enabling countries to reduce their carbon footprints. Though countries are relying on more coal in the short-term, new policies strengthen the case for a completely renewable future.

The European and United States governments introduced favorable renewable energy policies that set the table for sustainable growth. Each policy dedicates billions of dollars to initiatives that incentivize consumers, companies, and utilities to transition to renewables. These policies create a strong signal around the continued growth of renewable energy generation.

How Renewables Will Continue To Grow

Renewables are poised to continue rapid growth and adoption globally. The lingering global energy crisis, even with a potential economic slowdown, is highlighting the cost and environmental benefits of renewables. This realization is reflected in the global commitments from developed and developing countries to incentivize and invest in the adoption of renewables.

Governments influence the flows of investment throughout the energy sector and how companies allocate capital expenditures. Many funds and companies were wary of significant investment in renewables given the market downturn and energy crisis. The recent passing of the Inflation Reduction Act and REPowerEU plans sent strong signals in favor of renewables.

The European Union introduced the REPowerEU plan as a step towards energy independence from Russian natural gas and oil. In order to accomplish this, the plan lays out concrete goals that accelerate the transition to renewable energy like doubling solar photovoltaic capacity by 2025 and improving the permitting process for major renewable projects. The majority of the bill is focused on energy savings through consumer and commercial renewable adoption.

The United States passed the Inflation Reduction Act which mainly functions as a climate change bill. The Act earmarks nearly 50 percent of its $800 billion budget for clean energy and climate mitigation initiatives. Many of the initiatives in the bill incentivize consumers to adopt renewable energy through tax credits, rebates, and green loans.

Coal remains a reliable and steady power source for most developing nations due to its availability and cost. The global energy crisis caused China and India to prioritize energy security by re-opening and extending the life of coal-fired power plants. Despite increasing their reliance on coal, China and India are deploying some of the largest renewable energy farms in the world.

India invested over $1 billion in deploying the largest solar park that spans over 14,000 acres (about one-third the size of Washington D.C) and generates approximately 2.25 GW of energy. The construction of Bhadla Solar Park began in 2015 and continues to expand its solar energy generation. India also met its COP 21- Paris Summit pledge of 40% of its power capacity from non-fossil fuels almost nine years ahead of its commitment.

In China, Huaneng Power International deployed the largest floating photovoltaic project which generates 320 MW of renewable energy. The floatovoltaic project is one of many renewable projects that cements China as the world leader in wind and solar energy production. In addition, China’s solar power capacity is set for a record increase by adding 75 to 90 GW of solar power in 2022.

As overall inflation continues to persist, countries will experience further economic slowdowns that dampen energy demands. Central banks will continue to implement rate hikes to control inflation and consumption. This reduction in energy demand will ease the transition to renewable energy for consumers, corporations, and utilities.

Russia’s invasion of Ukraine caused global energy prices to soar which lead to a rapid increase in materials, shipping, and labor costs. While these costs affect every industry, new onshore wind and solar projects still cost roughly 40 percent less than coal or gas plants built from scratch. In addition, renewable energy is the cheapest form of energy and will likely benefit from further cost declines as technology improves.

These factors make renewables the most attractive investment for all stakeholders to control and reduce their energy bills. In addition to the cost benefits, recent legislation like the REPowerEU and the Inflation Reduction Act provide additional incentives for adoption. Finally, the energy demand slowdown provides an opportunity for stakeholders to invest in renewables with less worry about variable energy output.

The Renewable Future is Bright

Energy security and independence are top priorities heading into the new year for many countries. The global energy crisis highlighted vulnerabilities in the current supply chain which played a large factor in persistent inflation. This led many countries to pass legislation that signaled a strong belief in renewables as the solution.

The REPowerEU and Inflation Reduction Act emphasize the importance of renewables in curbing inflation and reining in excessive energy costs. Developing countries like China and India are also signaling their support for renewables as they continue to deploy the world’s largest renewable energy farms. While many countries are relying on fossil fuels to survive the current energy crisis, there’s no mistaking their long-term commitments to renewable adoption.